RSS
← Beyond Faith has a Book Launch date
Beyond Faith is here – some author thoughts on writing, rewriting and publishing →

The Beyond gang head for Word on the Street Sunday

Dana Bowman PI from Beyond Faith and Beyond Blood 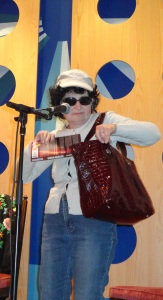 Dana Bowman PI from Beyond Faith and Beyond Blood

It’s official – Sharon A. Crawford and Dana Bowman will be at Word on the Street – the big annual book an magazine at Toronto’s Harbourfront Centre. Still up in the air is if Dana will be kept inside the covers of Beyond Blood or if Sharon will let her out. Sharon is set to appear at the Crime Writers of Canada booth from 2 p.m. to 3 p.m. in the company of four other crime authors. All will have copies of their books to sell, but also to talk about Crime Writers of Canada.

Dana will need a briefing if she is to do some of this. And Dana likes to follow her own ideas. She is a private investigator after all. But Sharon is a former journalist and she also like to stick her nose into things.

The other appearance is one author and one other volunteer for Sisters in Crime Toronto’s booth from 4 p.m. to 5 p.m. – perhaps more to Dana’s liking to appear here.

That will have to be sorted out on Sunday. For now, let’s talk a bit about Word on the Street, CWC and SinC Toronto.

I’ve been going to Word on the Street almost since it started in 1990. The first few years the location was Queen Street West from Spadina to Bathurst St. – not a particularly long stretch. But it sure seemed like it if you wanted to go to a specific booth at one end and another one at the other end, particularly if you were on a time-line to get to a workshop or reading or signing in a particular tent. The booths lined up in the street on both sides, plus the crowds moving through, made it difficult. And the availability of washrooms was limited to coffee shops and restaurants with long lineups – unless you wanted to use the portable toilets.

Fast forward to September 2007 and WOTS was now being held at Queens Park – no not in the legislature building or other Ontario Government buildings, but in an actual park, a circular park with booths positioned all along the east and west walkways and at the front and bottom. You could cut across the park to get to bootha on the other side – or walk along the circular walkway. Some tents were in the actual park. The setting was very relaxed and yes, there were portable toilets but also washrooms in nearby Victoria College on the University of Toronto campus. The college also held their annual book sale the same day, so it was a big day for books – the print kind.

At the 2007 WOTS I did my first appearance in a tent talking about freelance writing – interviewing techniques and the like. I was also running a course (in my house no less) a couple of weeks after and this WOTS talk was a great opportunity to get participants for that. It was also a lot of fun as I called people up from the audience to be the interviewee while I played interviewer for role playing. And my son and his then girlfriend, dropped in to watch the proceedings.

In future WOTS at Queens Park, I appeared at the Crime Writers Canada booths to promote and sell the Beyond books. One year the CWC booth was facing the sidewalk instead of the street, so it attracted less people. The location had some personal history with me. The CWC booth faced the Ontario government building where i had my first job at age 18 and 19 when I was a secretary (in another life, of course).

This Sunday, September 24, WOTS is in its third year in its third location- Harboufront Centre on Queens Quay West on Toronto’s waterfront. I have mixed feelings about it. On the plus side you are on the waterfront and the events are outside and some indoors. Some areas seem a bit crowded and the first year I was there, the SinC booth was at the end side of a long group of tables of various organizations. To get to the SinC spot you had to go in at the other end. At that end one of the poetry societies held were readings. The poet stood on the table and performed his or her poetry.

We’ll see how it goes this year and what Dana does and says if she doesn’t stay between the book covers.

Beyond Faith won’t be there – it’s still at the printers. But the flyers for the book launch will be and so will copies of Beyond Blood and Beyond the Tripping Point.

Maybe I’ll see you there. Look for one or both of us – Dana’s photo is at the top and mine is below here.

Sharon A. Crawford author of the Beyond books

Posted by Sharon A. Crawford on September 21, 2017 in Beyond Blood, Beyond Faith, Beyond the Tripping Point, Crime Writers of Canada, Fictional Characters Interviewing Authors, Sharon A. Crawford, Toronto Sisters in Crime, Word on the Street

← Beyond Faith has a Book Launch date
Beyond Faith is here – some author thoughts on writing, rewriting and publishing →