RSS
← Picture it to kick-start your story
Can fictional characters teach readers something? →

At 6.30 p.m., March 24, 2016 an unusual crime wave hit the Gerrard Ashdale branch of the Toronto Public Library. Downstairs, the dead body outline was “drawn” with masking tape. Upstairs, “crime” was in progress – at least between the book covers, and expanding to the audience facing the five crime writers in the front.

For the next hour and a half, true crime writers Mark Eddy and Nate Hendley and crime fiction authors Lisa de Nikolits, Steve Shrott and Sharon A. Crawford (also moderating to keep the crime enthusiasts on track) discussed various aspects of crime writing and reading – from authors’ and readers’ view points.

Besides the why we write what we do (Lisa and I have social justice as our reasons and Mark Eddy, author of The Recent History of Terrorism in Canada 1963 -2013, wrote that book because Canadian literature didn’t have this history published). We also discussed where we get our ideas. For example, many of mine come from real life incidents such as a harrowing drive up Highway 11 to cottage country with a friend when her car brakes stopped working. I take the incident and fictionalize the characters and plot.

But one of the most interesting discussions was in answer to the question:

What is your take on novel or true crime endings, i.e., should you leave the reader hanging or have a resolution that ties up the book’s contents?

Some wanted a full resolution, but some were okay with a resolution for the main plot, but some of the issues with the characters could be left hanging, especially for series novels. Nate Hendley, who (among other true crime books) wrote Steven Truscott; Decades of Injustice about Steven Truscott (who was wrongfully convicted of murder and rape at age 14,in 1959), was pleased that he could put in his book that in 2007 the Ontario Court of Appeal declared Truscott acquitted of the rape and murder of Lynn Harper. That declaration was the result of Truscott himself filing an application for this in 2001. Justice moves slow. In fiction, that can happen faster.

The five of us authors in the hot seats also discussed unusual ways we promote our books. For example, Nate Hendley had copies of his Truscott book at a presentation of a play about Truscott in southwestern Ontario. I dress up as my main Beyond Blood character, Dana Bowman and do short skits where Dana disses me. See my website for where Dana will next appear.

Meantime, here’s another photo of the CWC gang up close at Gerrard Ashdale. Both photos were taken by the library branch’s head librarian, Gail Ferguson. 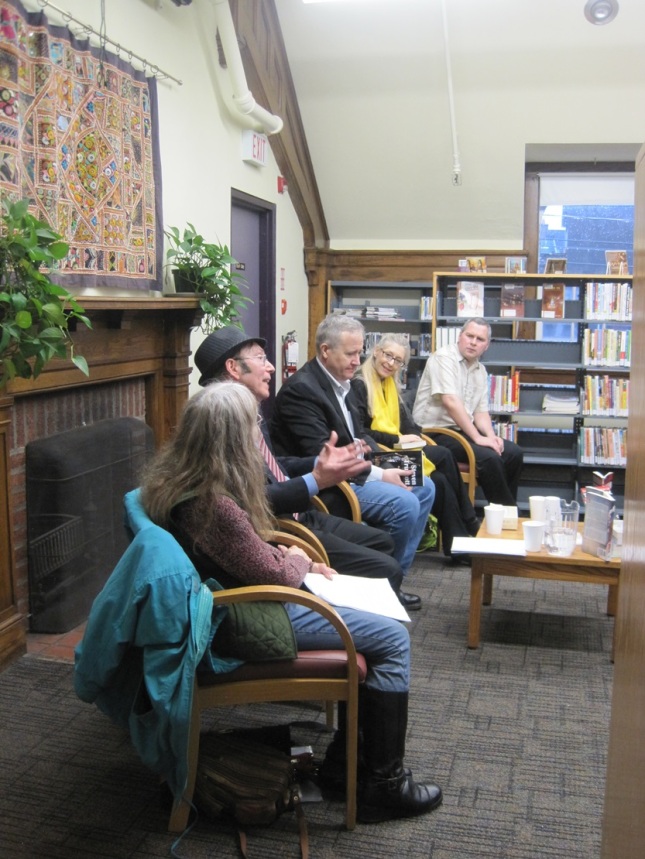 ← Picture it to kick-start your story
Can fictional characters teach readers something? →