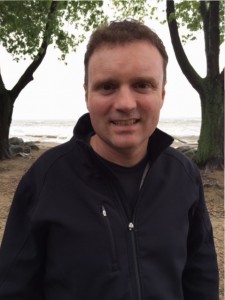 Here is my review of novelist Christopher Canniff’s book Poor Man’s Galapagos, also being launched by Blue Denim Press November 21, 2015. But first a bit about Chris.

Christopher Canniff is the author of Abundance of the Infinite (Quattro Books, 2012) and the forthcoming Poor Man’s Galapagos
(Blue Denim Press, 2015).
Christopher has been mentored by two of Canada’s top writers, MG Vassanji and David Adams Richards, at the Humber School for Writers.  He is the current President of the Canadian Authors Association Toronto Branch (www.canauthorstoronto.org).
He shortlisted for the 2010 Matrix Litpop Awards for fiction, and he won a short novel contest with LWOT Magazine in Montreal. He has published in Descant Magazine Issue 152 (Spring 2011), and he also shortlisted in the 2012 Ken Klonsky Novella Contest with Quattro Books. He has sold two radio scripts to Falcon Picture Group in Chicago, Illinois, USA for a nationally-syndicated radio program, and he has published with Tightrope Books in Toronto.
Christopher moved to Ecuador to begin writing.  There, he read over fifty books of world literature, learned a new language and culture, and taught English at an Ecuadorian university for WorldTeach, a non-profit and non-governmental organization based at the Harvard Institute for International Development. While in Ecuador, Christopher began work on two novels, one of which became Poor Man’s Galapagos.  He lived briefly in Quito (the country’s capital) and, for six months, lived with an Ecuadorian family in Portoviejo (literally translated, “old port,” a dusty town 30 kilometres from the coast, said to have been relocated from beach dwellings as pirates chased the residents further inland.) Christopher took culture, language and history classes about Ecuador, and worked with Plan International, an organization with the aim of improving Ecuador’s faltering rural education system.  Christopher obtained a Mechanical Engineering degree in 1995 from the University of Toronto, and he is a registered Professional Engineer in the province of Ontario.
He is married to Roxanne, and lives with his son Colin and daughter Abigail in Windsor, Ontario.

Christopher Canniff’s latest novel Poor Man’s Galapagos is the coming-of-age story of an 18-year old university student, Tómas Montgomery Harvey. But that’s where similarity to the usual coming-of age novel ends because of the complicated plot Canniff has woven. First there is the setting – a small Ecuador island, Isla de la Plata. The novel is set from August 1987 into 1988. A war between Ecuador and Peru has been ongoing for many decades. Military conscription is mandatory and the bottom line for Tómas is he is afraid to go to war, afraid of being killed. This is first hinted at in the novel’s beginning when Tómas, working with student revolutionaries, does not have the nerve to light and throw a Molotov cocktail at a passing government vehicle.

Friends and so-called friends of Tómas and his father have differing approaches to keep Tómas out of the military. His friend, Juan Carlos, the newspaper editor of the island newspaper and a former lawyer, tries to go the court route with conscientious objection. Edwardo Delgado, a long-time friend of his father, at his father’s wishes, hires Tómas to work as the engineer in charge of the large hotel resort Edwardo is building, which provides a means for Tomas to get a military card and an exemption from military service.

Tómas goes along with both, with disastrous results. As Juan Carlos tells Tómas “What people perhaps should do, and what they actually do, is often very different.” That includes Tómas’ father, the legendary freelance photojournalist, Montgomery Harvey. All his life Tómas has lived in the shadow of his father, always feeling no love from his father, who spent more time travelling for his stories, than with his son and wife, Veronica. As the novel opens, Montgomery has been linked in the press with embezzling funds and after a meeting with Tómas on the beach, he says he is leaving for good. After his father departs, Tómas decides he has to reconnect with him and find his birth mother. Only by choosing his own options, and following through, despite many hurdles, is Tómas able to transition through the murky road of becoming an adult.

The novel is told with the alternating viewpoints of Tómas and Montgomery Harvey, which works well to provide details to the reader, but never revealing too much at a time. To avoid any spoilers, let’s just say that Canniff builds up the plot, piece by piece, keeping the reader’s interest. Although the novel, starts a bit slow (despite that Molotov cocktail), hang in there, it picks up very soon. Your best bet is to keep on reading to the end in one sitting, if possible, like I did while a wind storm occurred outside.

Reviewed by Sharon A. Crawford, author of Beyond Blood and Beyond the Tripping Point

Christopher’s books are available at the usual places such as Amazon and Indigo. He is also on Goodreads.

For more information about Shane’s books and where they are available go to his publisher’s website.

Christopher Canniff’s book is one of two being launched by Blue Denim Press Saturday, November 21, 2015. For more details, check the flyer below

See you there on Saturday. I’m the guest author.