Following your muse when rewriting novels 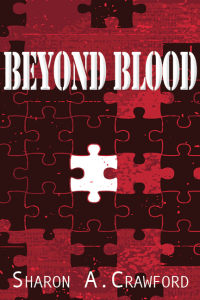 The latest Beyond book in the series

The more I rewrite my third Beyond mystery book, the more I learn about fiction writing. It is not all about making sure plot line works and is consistent and that characters are believable. The muse, that nebulous creative force does factor in. And not only when you are sitting at your computer, but when you are busy doing other things.

I can be making dinner, going for a walk (although not too much of that lately with our November weather) or even be asleep, when suddenly something will pop into my head to include in my novel. Sometimes it is an answer for some plot and/or character problem. But often it is something completely different that will work. Sometimes it is a reminder about what is missing.

The latter that happened with me is about my main character, PI Dana Bowman and is about including more emotion with her, especially after she suffers a severe trauma at the end of Part 1 in the novel. The novel’s first chapter has her feelings upfront and centre. She is feeling down and the weather (rain in November no less) is making it worse. She also runs into Don Fielding, the Detective Sergeant she met in Beyond Blood and where she ignored their attraction to each other. So, that comes up in the beginning of the new novel.

I have included the aftermath of her traumatic experience – emotional and physical but something still needs to be included near the end and the end of the novel. And so, the elusive muse brought this to me as well as an idea of how to write it.

Lesson learned? Let your mind (and body, too) go on to non-writing activities and get some sleep to give the muse the space to show up.

We writers need all the help we can get. Unlike some writers who claim they hate writing, I love writing, no matter how difficult it can sometimes get. What I don’t like is all the other stuff I have to do and the time it takes.

Well, now I have found something positive about doing housework, but with a disclaimer here. I do like to cook (and eat too), partly because it is something creative.

Speaking about Muses and being creative, a reminder for those in the Toronto, Ontario area. This Saturday, November 26 I will be participating in the Toronto Heliconian Club’s Gifts from the Muses Show and Sale – selling my Beyond books and reading an excerpt from Beyond Blood at the end of the 2 p.m. entertainment session – I’m after the musician then. More details here.

And if you can’t make it, the Beyond Blood icon at the top of this post links to my amazon profile – which also shows the Beyond the Tripping Point short story collection. Might make good Christmas gifts. 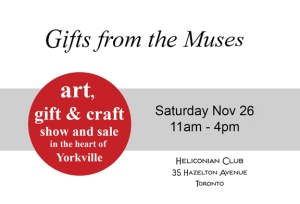 Gift of the Muses Show and Sale

Sharon A. Crawford’s latest in the Beyond series

This week I finally got back to rewriting the next novel in my Beyond mystery series. The plan had been to spend a good part of June, July and August doing this. But for a change I had a lot of client work. That I’m not complaining about. Neither am I complaining about spending time gardening. As well as writing, gardening is a passion of mine.

However, I am complaining about all the health issues I’ve had to deal with lately, some caused by others’ negligence. (See my post this week on my personal blog Only Child Writes.).

Still doing one client’s work – but no complaints. Client confidentially doesn’t allow me to discuss the client’s work, but sufficient to say it is interesting and challenging and when it arrives I switch over from the novel rewrite to the client work.

Getting back to the big novel rewrite is also a challenge. Having ideas percolating inside my head while I was doing other things and also some suggestions from the editor at Blue Denim Press (my publisher) have been big helps. So has one of my writer friends and colleagues – Rosemary McCracken – just publishing the third in her Pat Tierney mystery series.And having a wacky main character like PI Dana Bowman is good. At least I think so, although she does get inside my head a lot and likes to have her way in her stories. All inspiration to do more than put the seat of my pants to the chair.

How did I actually get back into the rewriting?

First, I reread the novel and comments I had made for changes and also noted what I had changed. Then I got in and made some changes in the beginning and continued on until I got stuck. But I had ideas for other parts, including the ending which needed a big change, so those are the places I focused on next. I feel better that I made changes in the ending even though I know that some of it will be changed as more changes in parts coming before will be made. That’s okay. Often just doing something that is a change is a good start.

Writing the ending before some of the rest, you may ask? I am following the advice given by another author Ken McGoogan who said when he gets tired of writing in chapter order, he will go the end. Mind you he writes narrative non-fiction. But I think it can be done with fiction as long as you realize it is not written in granite. Well, some writers think their prose, and even their punctuation, should be left exactly as they write it.

That is arrogance and maybe a little worry that the editor will mess up your prose so it isn’t really yours when it’s done. And yes, being an editor myself, and a former journalist who worked with several editors, it does happen. However, there is one thing we writers need to remember.

Writers work in isolation. Writers see their creations with tunnel vision. Another pair of eyes will find flaws and better ways to express something than the author.

So keep up the rewriting. Although you can get carried away with that. Another author colleague is still making changes in his novels after they are published. And yes he does have a trade publisher, so not being self-published he can’t exactly make changes in the print book for sale. But he can do so for his author readings.

If you click on the Beyond Blood book icon a the top it will take you to my amazon author profile and books.